Wolves are animals in Lost Ember. The wolf is the main character of the game.

The main character (the player) is a standard black wolf. However, when it has its power (which is for most of the game), it has a white streak across the right side of its face. The player will only lose their power in a few specific cutscenes, and when they pass the red barrier and the companion gets stuck behind them.

Apart from the wolf that you play as, wolves only appear in memories.

In memories, wolves are first seen during Chapter IV: Close to the Sun. Once the player enters the Temple of Light, they see a memory where Kalani sees wolves trapped in cages. She opens all of the cages, freeing the wolves. They're shown once more during the same chapter, in a gladiator-like arena called the Yawar Arena, when two wolves are depicted fighting a human.

Apart from the player, wolves don't appear again for a little while, until Chapter V: Wayla. In a memory, Kalani finds a wolf pup, whose leg is trapped by a rock. She frees it, and returns it to his pack. In the same chapter, while Kalani is running away, Atevo and his men find the pack of wolves, and throw spears at them. However, the pup that Kalani saved escapes, and follows Kalani around for the rest of the memories. 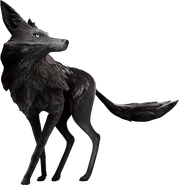 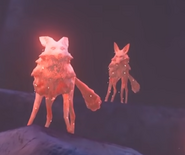 Wolves in a memory
Add a photo to this gallery
Retrieved from "https://lostember.fandom.com/wiki/Wolves?oldid=300"
Community content is available under CC-BY-SA unless otherwise noted.